Multiple births always attract attention and there is generally a great deal of fascination about the concept of more than one baby being born at the same time. But for parents of quadruplets, their initial responses can be far from what can be called exuberance, at least in the early stages.

The practicalities of raising four babies to adulthood can seem utterly overwhelming, which is why experienced parents of higher order multiples (HOM) say it can help to just take things slowly at first and to allow the news to settle in, one steady day at a time.

As well as the 4 separate eggs and sperm variety, there is also the possibility that:

Quadruplet pregnancy is usually diagnosed on ultrasound. This is the most common time for parents to be told that 4 babies have been conceived and implanted. Seeing 4 little embryos on the screen can help the idea become a reality, but it’s very normal for expectant parents to leave the ultrasound rooms in a state of shock. If they have had fertility assistance, then there is an increased risk of multiple birth so the possibility may already have been raised and discussed. Although rare, it is not unknown for quadruplets to be naturally conceived. 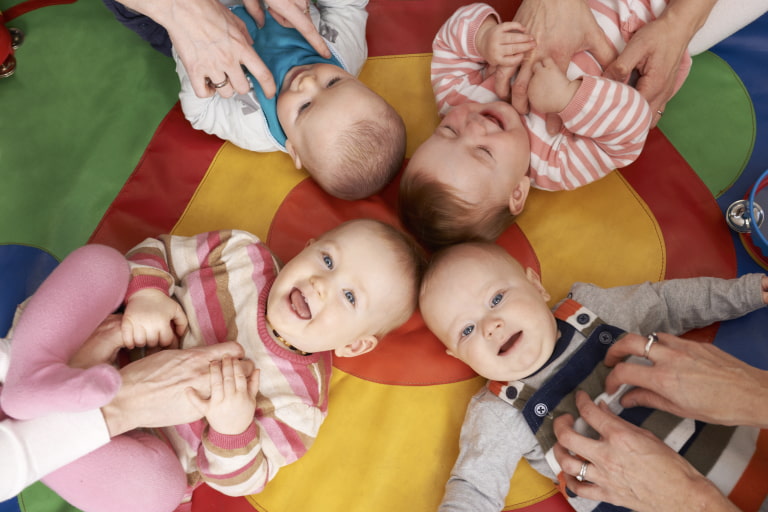 Tell us again how lucky we are!

Different cultures view multiple births in diverse ways. For the Mayans, identical twins were seen as a blessing from God and a sign that they shared one soul which had been split between the two. In Roman culture twin boys were also viewed as a blessing, but unfortunately this belief did not extend to twin girls. They were seen as too much of a burden and the expense of raising 2 dowries instead of one overshadowed the specialness of two babies.

Within Greek and other European mythology, twins and other higher order multiples all appear, with their existence being attributable to the blessing or, alternately, a curse from an almighty God.

In some ancient cultures, multiple births were seen as an outward sign that a woman had been unfaithful to her husband and the existence of more than one baby was indisputable proof of this. Without any means of disproving this theory the poor women and their babies were often left to fend for themselves.

It goes without saying that we have much to be thankful for in terms of our current understanding of science and reproductive biology. But no matter how smart we have become, and irrefutable evidence now supports our knowledge, there is still a little mystery and specialness surrounding multiple births.

Are quads as common as they used to be?

In the 1980s and 1990s, multiple pregnancies were generally more common than at the present time. This decrease is thought to be due to overall advances in technology surrounding fertility assistance as well as the increased likelihood of these pregnancies being successful.

In the early days of assisted reproductive technology the general approach was to implant as many fertilized eggs as possible and therefore increase the chances of at least one of them implanting. But since there has been a greater understanding of the processes involved, as well as changes in the regulations surrounding the numbers of embryos which can be implanted, this has meant a reduction in the number of quadruplets being born.

There is an increased likelihood of quadruplets when:

Risks to the mother include: Risks to babies include: