Fall in love with these top baby boy names

Congratulations! You’ve just discovered you’re having a baby boy. Choosing what to name your baby is one of the most impactful decisions you’ll make for him, and researching the endless possibilities of names (and spellings!) can be a fun experience for you and your partner. Here are some things to consider and a list of baby boy names to get you started. 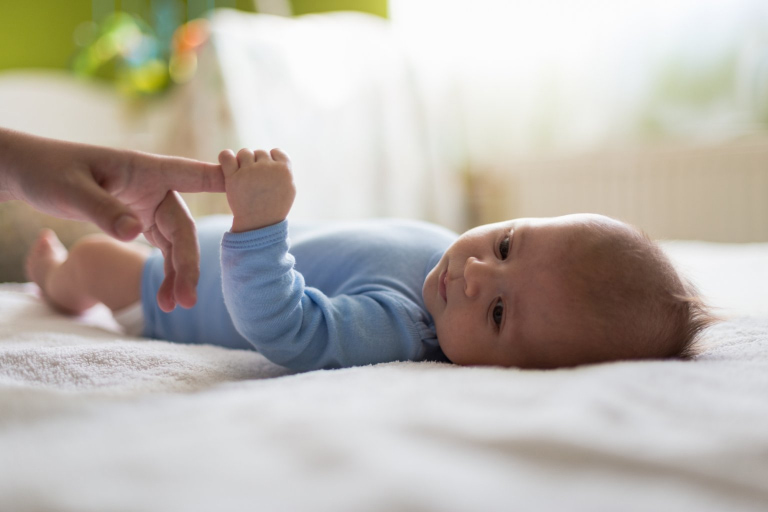 When you’re considering all of the names and combinations (if you’re giving your baby a middle name too), it’s nice to think of your future son’s initials and what they may spell. Jennifer Moss, founder and CEO of BabyNames.com recommends parents think about how your child’s initials will look monogrammed on a kindergarten backpack or printed on a business card one day. “You don’t want them to spell anything that could be embarrassing for your child,” says Moss. She lists the “teasing potential” of names and initials as one of her top seven tips for choosing a baby name in her ,“The One-in-a-Million Baby Name Book.” You might want to avoid initials that spell UGH or ICK and common text phrases like OMG or LOL.

On the other hand, you might deliberately choose initials that could inspire a future nickname for your son. For example, Alexander James could be called “A.J.” or a child with the initials A.C.E. could be called “Ace.” Your son might appreciate your thoughtfulness later in life.

A name is a defining feature for any person, and you want your son to be proud of his. While you’re researching, look into the meaning of your favorite names. Names can mean a wide variety of things from honoring family by using ancestral names, to specific qualities in the meaning that you'd like to relate to your little boy. For example, Oliver is one of the most popular boy names lately, and it means “ancestor’s descendant.” Meanwhile, Asher, another popular name for boys, means “blessed, happy.” Learning a name’s history and meaning might help you decide between your favorites. Looking for something specific? Check out our convenient baby name finder for more.

Here are some great boy’s names to consider, from A to Z.

Asher
This name is of Hebrew origin and means “blessed, happy.” In fact, the first known Asher was the eighth son of Jacob in the Bible. If you choose this name, your son’s friends might call him Ash or Ashy, both cute ways to shorten the name.

Other popular A names for boys include: Aidan, Aaron, Andrew, Axel and Adrian

Brayden
This name of Irish origin can mean “brave” or “wise,” though it’s thought to have originally been used to denote someone who lived near a broad valley. Alternate spellings include Braden or Bradon.

Other great B names for boys include: Brandon, Bradley, Brady, Bentley, Blake and Barrett

Caleb
Another Biblical name, this one means “whole hearted.” This sweet baby boy name may have gotten a boost from characters on popular TV shows including The O.C., Buffy the Vampire Slayer and Pretty Little Liars.

Other cool C names for boys include: Carson, Christopher, Callum and Corey

Dominic
This name of Latin origin means, “of the Lord” or “belonging to God.” Some parents prefer the alternate spelling of Dominick, and potential nicknames might include Dom or Nick.

Other popular D names for boys include: Darren, Dante, Darwin, Diego and Devin

Emmett
Emmett is a popular British last name that means “entire.” It got a boost when the Twilight books became bestsellers, thanks to the character named Emmett Cullen. If you choose this name for your little boy, he might score a nickname of Em or Mett.

Other awesome E names for boys include: Ethan, Eli, Edward and Elliott

Finn
This Irish name means “fair” but it’s also a Nordic name meaning “man from Finland” (makes sense!). You might also like the alternate spelling of Fynn for your little one.

Other fun F names for boys include: Franklin, Ferris, Fuller and Farrell

Grayson
This name literally means “son of the gray-haired one.” It’s gained popularity over the past few decades, in part thanks to pro athletes Grayson Boucher and Grayson Burne, as well as fictional characters Dick Grayson (DC comics’ Batman) and Grayson Kent (Drop Dead Diva).

Other popular G names for boys include: Gabriel, Gideon, Gibson and Grady

Henry
This originally German name means “ruler of the home” (moms and dads of new babies might feel that this is extra-appropriate!). The French spelling is Henri, and nicknames include Hank, Harry and Hen. And, did you know? The U.K.’s Prince Harry’s given name is Prince Henry of Wales.

Other cool H names for boys include: Hagan, Houston, Hunter and Hartley

Ian
This name has Scottish roots and means “God is gracious.” It might not be intuitive, but Ian is the Celtic version of John. Most people pronounce it “EE-an,” but some Ians out there (like 90210 actor Ian Ziering) like to say “EYE-an.” It’s up to you!

Other interesting I names for boys include: Igor, Indio, Isaac and Ishmael

Jasper
This English name means “treasurer,” so this name could be fun because your baby boy will surely be a treasure to your family. Jasper is also a common last name, as in noteworthy athletes such as Josh Jasper and Derrick Jasper. If you choose this moniker for your little boy, people might bestow the nicknames Jazz, Jasp or Jas.

Kaden
This name can also be spelled Caden, Kayden, Kaiden, Kaeden, Kadyn, Khaidyn or Kaidyn. It’s thought to be of American origin and means “fighter.”

Other fun K names for boys include: Kyle, Kingston, Keegan, Kade and Kyler

Leon
Your little one may have the heart of a lion with this French name that means “lion.” Leo would be an adorable nickname for your little boy if you choose this name.

Other popular L names for little boys include: Luca, Landon and Lincoln

Milo
This English name means “soldier” and can be pronounced “MY-low” or “ME-low,” depending on your preference. Some famous Milos include Milo Ventimiglia, Milo Manheim and Milo Aukerman.

Other awesome M names for little boys include: Myers, Michael, Magnus and Monroe

Nolan
This popular first name got its start as an Irish last name meaning “champion.” Fittingly, it’s been the first name of choice for sports greats including Nolan Ryan, Nolan Carroll and Nolan Arenado. It could also be spelled Nolen.

Other neat N names for boys include: Nathan, Norris, Noah and Niko

Other fun O names for boys include: Otis, Oliver and Orin

Princeton
If you’re looking for a name for your little prince, this one of English origin could be a winner. It means “a prince’s place of residence.”

Other popular P names for boys include: Paul, Porter and Parker

Quinten
If your new baby will be the fifth in your family, this name of Latin origin could be perfect, since it means “fifth.” Even if that’s not where your little boy falls in the birth order, it’s still a sweet name for a baby boy.

Other cool Q names for boys include: Quinn and Quade

Rafe
This Old English name is the medieval pronunciation of the name Ralph, and it means “wolf counsel.”

Other fun R names for boys include: Rhys, Ronan, Radley and Remi

Shiloh
This elegant name of Hebrew origin means “His gift” or “God’s gift,” perhaps a fitting name since you’ll surely feel your new baby boy is a great gift.

Other neat S names for boys include: Samuel, Samson, Sebastian and Sawyer

Theodore
This name of Greek origin means “divine gift,” and common nicknames include Ted, Theo and Teddy. In fact, did you know that the “teddy bear” got its name from the 26th U.S. President Theodore Roosevelt?

Other popular T names for boys include: Thomas, Tristan, Tanner and Topher

Other cool U names for boys include: Utah, Ulrich, Umi and Ulysses

Valentino
This Italian name for a little boy means “strength” and “health,” things you’ll surely wish for your son.

Other terrific V names for boys include: Vance, Valor and Varick

Wade
This name is a common English last name that means “traveler by the ford.”

Other neat W names for boys include: Walter, Walden, Walker and Warrick

Xander
Short for Alexander, this Green name means “defender of the people.” Who knows? It might inspire your son to live a life of courage!

Other interesting X names for boys include: Xavier and Xanadu

Yates
In history, names were often given as descriptors. This name of English origin was given to someone who lived near a gate or who was a gate-keeper.

Other neat Y names for boys include: Yaal, Yasser, Yale and Yancy

Zane
This name of American origin means “God is gracious.” The Arabic spelling is Zain, also a nice choice for your little boy.

Other popular Z names for boys include: Zachary, Zeke and Zander