A breech birth occurs when the baby is born with their bottom, legs, or knees coming out first, rather than their head. Babies are in a breech position in about 3 to 4% of term pregnancies in the United States. About 7% of babies are breech by 32 weeks of gestation. It is considered normal in the second trimester for babies to be in the breech position. Essentially, the risks of having a breech birth are closely matched to the weeks of pregnancy.

At the start of labor, most babies are lying on their side, with their head facing towards either the mother’s left or right side. In a breech birth, the baby’s head is generally sitting just below the mother’s diaphragm and rib cage. Feeling a distinctive hard and bony head in this region, rather than a softly rounded bottom, is one of the key factors in diagnosing a breech presentation. 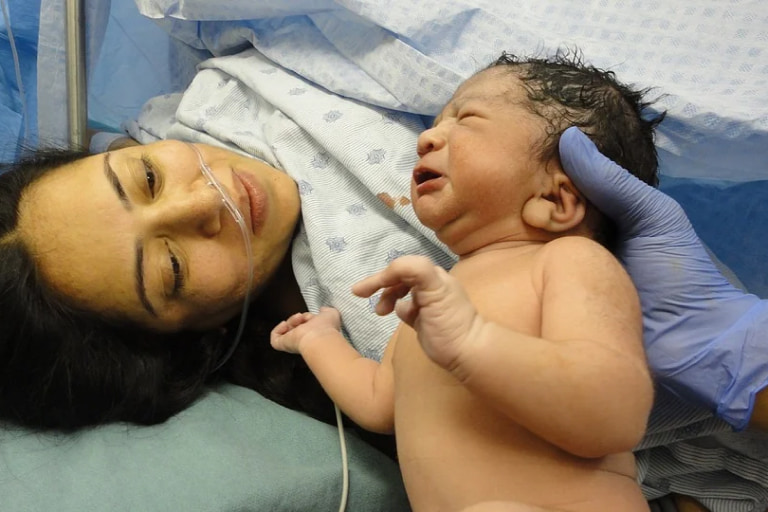 How will I know if my baby is in a breech position?

You may not know until your maternity care provider tells you. There are some fairly classic signs which can raise the suspicions of a health care practitioner. Sometimes, though, it’s not evident that the baby is in the breech position until labor has begun and even then it’s not always clear.

Signs of breech presentation include:

Prematurity is by far the most important factor which influences the likelihood of having a breech birth. Around 25% of all babies are in the breech position before 28 weeks gestation and, over the next 8 weeks, this reduces to just 3%. The baby grows so much in the last couple of months. They can’t move as freely during this time and once their head goes into the “down” position in the mother’s pelvis, they tend to stay there. Because the baby’s head is so heavy it tends to move into the headfirst position and finds a comfortable niche in the mother’s pelvis. The baby hopefully sits there until they are ready to be born.

There are factors that can increase your chances of having a breech birth, such as:

What are a mother’s choices if her baby is in a breech position?

This really depends on each mother’s individual history and the position of her baby. If the baby is in a frank breech position with their bottom coming first, then a “trial of labor” could be considered if the maternity care provider is skilled in breech births.

There are no guarantees of a vaginal birth, though. In the United States a woman having a vaginal breech birth is rare. In 2019, 93.8% of breech babies were born by Cesarean birth. If a vaginal trial of labor is attempted, it is common for the baby to have an electrode placed on their bottom and for the mother to be connected to a monitor. This way, any change in the status of the mother and her baby is quickly detected. If necessary, plans are made for a Cesarean birth before either of them is compromised.

It is also common for an epidural to be inserted for mothers who are having a trial of labor. This helps to stop the urge to push before the cervix is fully dilated. It is also more likely that stirrups are used so that the birth provider has easier access and can have better control of the birth.

What are the risks of having a vaginal breech birth?

There are several risks associated with having a vaginal breech birth.

One is a longer birthing process. Uterine contractions start the same way when a baby is in a breech position as they do when the baby is head down. But because the pressure of a soft bottom or foot is not as great as a bony head, labor can take longer to establish. Breech labors and births can be more exhausting and fatiguing for the mother, particularly in the first stage. Despite their best intentions, some women defer to having a Cesarean birth because of the extent of their fatigue and exhaustion.

Umbilical cord prolapse is more common with breech births. This is because the baby’s bottom, legs, and feet don’t fit as well into the mother’s pelvis as the baby’s head does. Think of a plug in the bathroom sink and you’ll have a fair idea of what a good fit should be. The umbilical cord is slippery and can easily slide through the cervix and out of the vagina if there is space between the baby’s presenting body part and the open cervix. Once the cord is exposed to the outside air and temperature, it constricts. The blood flow containing oxygen and nutrients to the baby then shuts down. This is an obstetric emergency, and a Cesarean must be done immediately.

Another risk is that the umbilical cord can become compressed and the flow of oxygen to the baby is diminished. This also constitutes an obstetric emergency and a Cesarean birth becomes necessary.

The baby’s head can become entrapped. When the rest of their body is out of the mother’s vagina but their head is still not out, there are major concerns with the baby’s oxygenation and obstructed labor. In a worst-case scenario, a Cesarean birth needs to be done. This is more likely if the mother’s cervix has not fully dilated when the baby’s lower body was delivered.

Because the head is the largest part of the baby, the cervix has to be fully dilated to allow it to pass through. If the baby is looking upwards to the top of the mother’s uterus, then this makes the presenting part even bigger. This is more likely when the baby is close to full term because at that stage, the distance between their hips and the widest part of their skull measures the same. In preterm babies their head is bigger and their bottom is narrower.

What does it mean to turn the baby?

It is estimated that around 25% of all babies who are in the breech position after 35 weeks of gestation will turn themselves without any help at all.

The decision whether to try an external version or rotation of the baby is made very carefully. The obstetrician needs to be confident that there are fewer risks doing this than if the mother is supported to go on and have a vaginal breech birth if a trial of labor is acceptable to both mother and provider.

It is important that the exact position of the umbilical cord and placenta are identified before an external version is done. Otherwise, there is a potential for the placenta to be sheared off the wall of the uterus or the baby to become entangled in the umbilical cord. Sometimes a mother is given a drug beforehand to relax her uterine muscle. The success rate of an external version is around 40 to 70%, depending on the skill of the individual practitioner.

Even if an external version is effective in turning the baby to a head down position, some babies will automatically flip back into a head up position. The earlier in the pregnancy the version is done, the greater the likelihood of this happening. Therefore, turning the baby at around 37 weeks of gestation is thought to be the ideal time.

Some women believe that if they lie in a particular way, do specific exercises, or sleep in a special position, their baby will rotate to head down. But there is no scientific evidence to support these claims. Likewise, acupuncture, candling (also known as moxibustion), homeopathic drops, and or aromatherapy are not effective in changing the way a baby is first presenting themselves to the world.

What are the risks to my baby with a breech birth?

When the labor is well managed and the baby monitored, the risks are minimized. But there can still be some risks such as:

When a baby is in a breech position, the onset of labor can be very similar to when it is headfirst. A few additional things to keep in mind with a breech birth are: